Cardiff and Vale College is celebrating a record year of success on A Levels and BTEC Results day.

The results build on a year-on-year increase in students gaining A grades in A Levels, with a record number of learners achieving A*s and As across the board, while the number of students gaining As was also higher than ever before. The College also saw more students taking AS and A2 courses, with 646 A Level learners getting their results today across more than 30 subject areas.

As one of the largest providers of BTEC qualifications in the country, around 1,000 students study BTECs at the College every year in subjects ranging from Cyber Security, Esports, Sport, Photography and Applied Science. Those gaining BTEC grades today also gain UCAS points, just like A Level learners.

Cardiff and Vale College Group Principal Kay Martin said: “I’m absolutely delighted to see so many of our students coming on campus to find out they’ve done so well in the first post-pandemic results day. “It has been so heartening to watch students and staff come together to overcome the restrictions imposed by COVID-19 during the first year of their A Levels. The students’ hard work and determination have truly paid off, and today we can wish them all well as they progress into top universities, further learning, education or employment. “Thank you to both students and staff for working with such commitment to ensure these successes.”

Both A Level and BTEC learners at CAVC gain support from the College’s Careers and Ideas team to apply to university, with more than 600 learners applying via UCAS this year. Large numbers of CAVC students will now be progressing from A Levels and BTECS into Higher Education, including Oxbridge, Russell Group universities and other leading universities across the UK.

One student who has made the most of what CAVC has to offer is A Level student Annis Wiltshire, who after gaining an A* in Classical Civilisations and an A in Chemistry and a Distinction Three in Global Perspectives and Research, is off to study Classics at Oxford University. 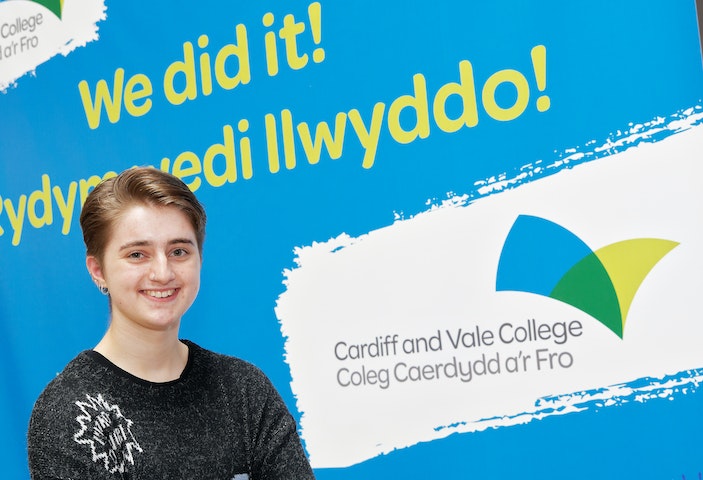 “I feel completely in shock,” Annis said. “I was not expecting to get the grades I needed so I am incredibly happy and very grateful. I loved studying at CAVC – I met so many people and I am very sad to be leaving. Going to CAVC was the best choice I ever made.” Annis signed up to the CAVC Scholars Programme, which is designed to offer learners the opportunity to broaden their learning experience beyond the traditional A Level curriculum and offers support with applications to elite universities.

“The best thing about the College was the tutors,” Annis, who is 18 and from Cardiff, said. “I always felt incredibly supported both academically and in my wellbeing, and I just loved coming in to College, especially for my Classics lessons. “I chose CAVC because of the Classics A Level which I really wanted to do. I had also heard about the focus of CAVC on acceptance and inclusivity as well as support, which I had not received at high school. “My teachers helped me so much, not only through teaching but also in my university application, as well as giving me so much general support for my wellbeing. I also had a huge amount of support for my SpLDs from the Additional Learning Needs Department who were always so encouraging and made College so much easier and enjoyable.”

Aya Idris from Cardiff, achieved A*s in Maths, Chemistry and Arabic and an A in Biology. She will now travel to UWE Bristol to study Forensic Science. 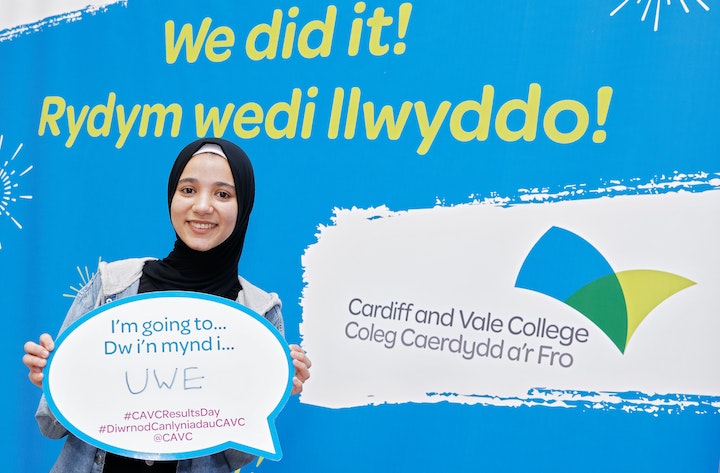 “The results are unexpected as the exams were so hard,” Aya said. “I’m so happy and so relieved – my parents are really happy as well. “College has been really good. I especially liked being able to come into the College in the second year – I think it helped, meeting new people and making friends. When I finish my degree I want to be a Crime Scene Investigator and that’s why I did these A Levels.”

Naima Khan studied a BTEC in Applied Science, gaining top grades of Distinction*, Distinction and Distinction. “I chose CAVC because I’d heard so much about it being an open, friendly, non-judgemental and good place to be,” the 19-year-old from Cardiff said. “My experience is that it has been like a family and I’ve always had the support I needed. “I’m going to study Biomedical Sciences at Cardiff Met – it’s a career I’ve always dreamed of going into.” Saffron Vanderfolk-Pellow, 18 and from Cardiff, gained As in English and Sociology and Bs in English and Sociology. As well as this, Saffron was a Student Governor & Sabbatical Officer.  While at the college she presented at many events including at the Senedd, encouraging young people to vote. She is going to Plymouth University to study Geography with International Relations. 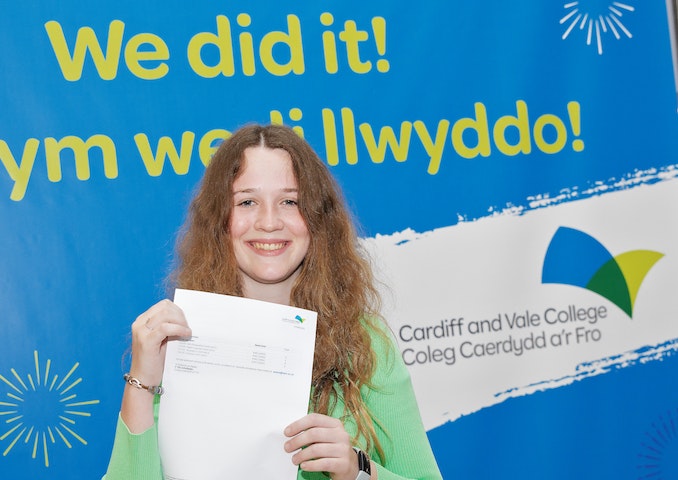 “I feel really good about my results – to be honest it’s a shock,” she said.

“It’s been great here; I’ve loved the last two years at the College. I think the atmosphere is great and the standard of teaching has been wonderful – I wouldn’t have got where I am without it. “I chose the College because I thought it would give me more independence, which school wouldn’t give me. I want to be a pilot and the College has 100% helped me to start achieving my ambitions.”

Sam Nicholls achieved As in Law, Biology and PE. The 19-year-old from Porthcawl will now be off to the University of Birmingham to study Economics. 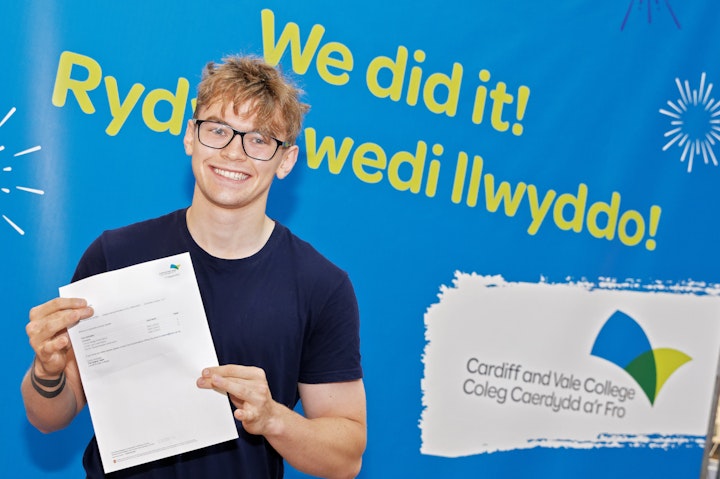 “I’m ecstatic!” he said of his results. “I worked very hard for them, though. I’m just over the moon. “The teachers have been insanely helpful and they got me through it. My time at the College has been great. “I hope to go into banking or accounting; work that will allow me to use my degree. There’s no doubt that the College has helped me achieve that.” Faiz Zia gained a B in Sociology and a C in Religious Studies, the 19-year-old who lives in Cardiff is going to the University of Manchester to study Criminology and Sociology. 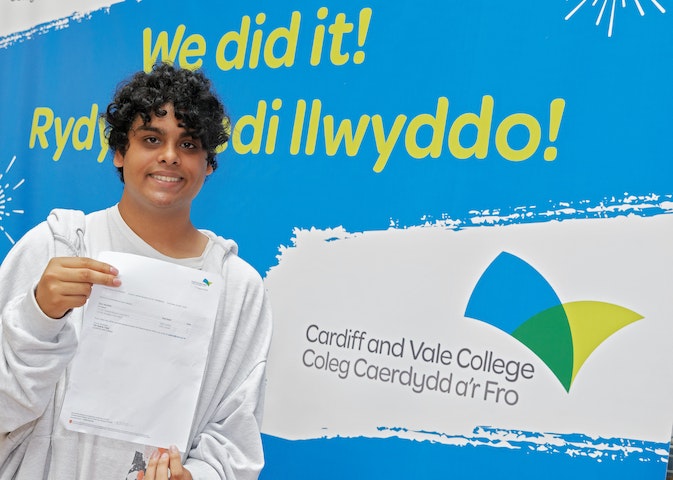 “My results are better than I expected,” he said. “I did have a rocky start but it got better. “I’ve really enjoyed my time at the College. I’m originally from Rotherham but my grandparents live in Newport so I decided I wanted to study in Wales and it’s been really good. “The staff at the College have been really, really helpful and the culture is really supportive and encouraging. I’ve really liked it here.” But A Level and BTEC Results Day is not just about university. Ffion Llewellyn, 19 and from just outside Newport, is progressing on to an apprenticeship with the BBC having gained an A in Geography and Bs in Business and Art. “I’m surprised more than anything else!” she said. “I’m very excited about starting an apprenticeship with the BBC. I start in about a month and I’ve spoken to a few of the people there who all seem very nice.”

Ffion was part of the first cohort of the Jason Mohammad Academy, where students can learn digital journalism skills alongside their course under the guidance of the radio and television presenter. “The Jason Mohammad Academy was great,” Ffion said. “I wouldn’t have chosen the BBC without the Media Academy. I actually feel sadder about leaving than the College than I did about leaving school.”

Luke Pilcher studied a BTEC Extended Diploma in Computing. After achieving the highest possible grades, triple Distinction*, he has been employed by Avantis Marine as an electrical apprentice and network engineer.

“My experience at CAVC was excellent,” the 22-year-old from Maesteg said. “The staff were excellent throughout and I am very thankful for the support they gave me.”

Beth Hughes, 18 and also from Newport, gained an A* in English and As in History and Film. She will be going to Bath Spa University to study Film. 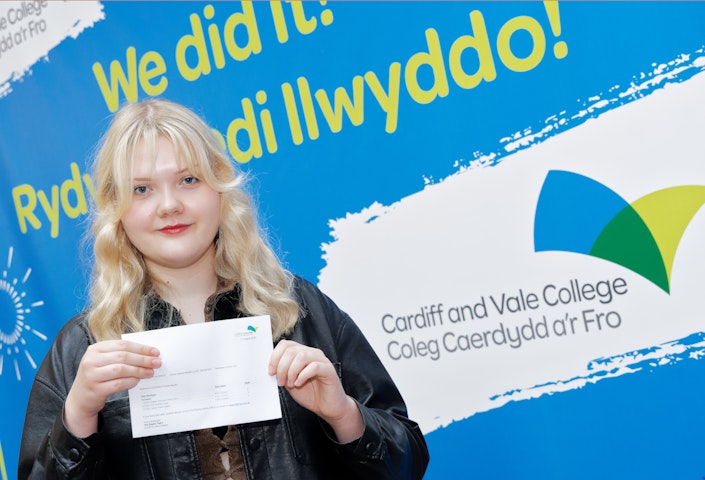 “I’m very, very happy with my results,” she said. “I wasn’t really expecting them with the pressures of COVID so it’s really a shock. “I’ve enjoyed my time at College a lot. I’ve loved the independence and freedom it has given me. I chose the College to get that sense of independence and to gain a sense of transition from school to university. “The help I got from the teachers has been so important and that was great.” Ellie Davies, 18 and from Barry, achieved an A Psychology and Bs in Biology and Chemistry and will also be going to Bath Spa University. To study Forensic Science. 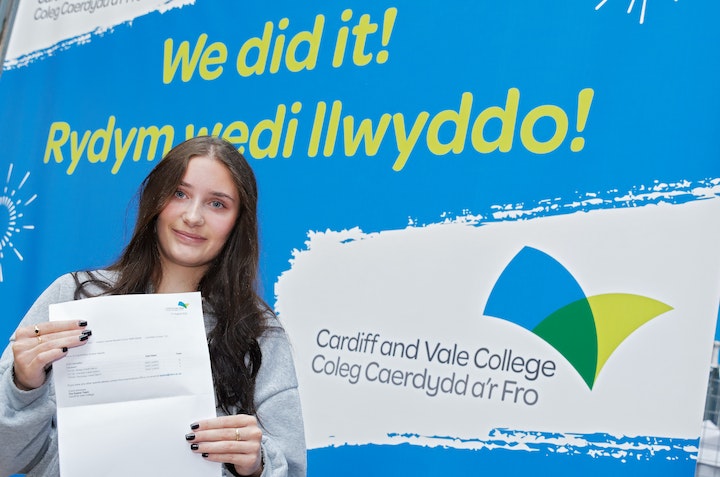 “I’m overwhelmed,” she said. “I definitely wasn’t expecting these results. I’d prepared myself for the worst but I’m really chuffed with the outcome! “The first year was a challenge with learning under COVID but when we started to come in to the College it was really fun to meet new people and experience new things. It felt more independent as well.”

CAVC also offers other stand out opportunities for all students alongside study, including the renowned sports academies. Two captains, Tom Caple captain of CAVC Rugby Academy and Josh Brown, captain of CAVC Basketball Academy both achieved academically alongside playing their respective sports for CAVC and their country.

CAVC Rugby Academy Captain and A Level learner Tom Caple is going to Cardiff University to study Civil Engineering, having achieved excellent grades in Economics, Maths and Physics at A level. 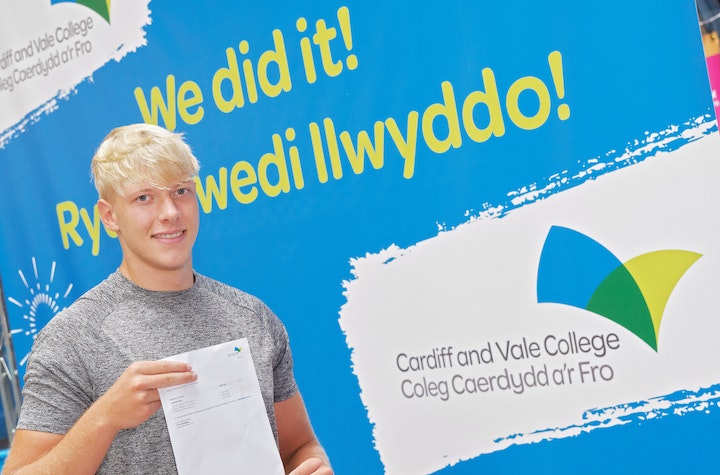 “I’ve really enjoyed my time at the College – especially being Captain of the Rugby Academy, winning the league & bonding with the boys and going on a cultural visit to South Africa” the 18-year-old from Cardiff said.

“I really want to be a professional rugby player but I want to have a degree for my future. The College has definitely helped me with my ambitions – I don’t think I’d be where I am now if wasn’t from all the help the College has given me.”

Josh Brown studied a BTEC Extended Diploma in Sport and achieved a Distinction and two Merits.

“I’ve enjoyed my time at college and feel I have learnt great transferable skills from my course in both the Business and Sport industries,” the 19-year-old from Cardiff said. “After taking a gap year to build up my coaching skills, I’m planning on going to Solent University to study Sports Coaching. I’m the captain of the Basketball team at CAVC, and particularly enjoyed going on tour with the squad for a tournament in Nottingham.”