Twin brothers who are studying Public Services at Cardiff and Vale College have both passed their Army assessments and will join the Reserves.

James and Miles Latham, who are both 18 and from Barry, both achieved the maximum D*D* in their Level 3 Diplomas last summer, and are progressing on to the Extended Diploma.

They have decided to get as much experience of life in uniform as possible to help them follow their dream careers in the Police Service. Both have also been key members of the College’s Combined Cadet Force (CCF) and will continue to act as CCF ambassadors and guest lecturers.

As part of their Army assessment, James and Miles (pictured above at a pre COVID-19 CCF event) opted for the Officer selection process. This involved months of interviews, fitness tests and written tests – they even volunteered to complete a technical assessment as well in order to widen the choice of Army units they could serve with.

They both excelled at their assessments and will now have a wide choice of Army units to serve with.

CAVC Public Services Lecturer Gary Pedder said: “It has been a pleasure to teach such committed, focused and determined young men. With these qualities at their disposal, it seems unthinkable that they won't excel at anything they set their minds to - we wish them well!!”

Fellow Public Services Lecturer and CAVC CCF Contingent Commander Tom Jones added: “Both students were highly motivated, engaged, active and took all of what the Cadets offered. They embraced the safe and progressive culture and proved themselves as leaders and peer mentors. They both excelled at drill, first aid, fieldcraft and marksmanship - thoroughly enjoying the Cadet culture, lifestyle, and family.

“Although the Cadets is not a recruitment tool for the Armed Forces it most definitely provides a safe and valuable "look at life"; one in which both Miles and James "found a home."

“They are both looking forward to starting their HND in Public and Emergency Services which will be topped up with a BSc (Hons) degree at the University of South Wales. Once completed, they both wish to study for a master's degree in counterterrorism.” 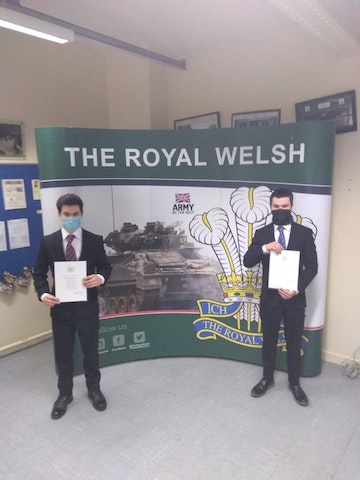