A Cyber Security student from Cardiff and Vale College has made it to the top of a list of hundreds to secure a degree level Software Engineering apprenticeship with a major financial services company in London.

Morgan McNeil, who is 18 and from Cardiff, was offered one of just four places – he was among a thousand applicants for the role. He was supported by CAVC Careers Coach Cristina Negoescu and the College’s Careers and Ideas team throughout his application.

While he was studying at the College, Morgan represented Wales at the finals of WorldSkills UK in the Network System Administrator heats. He is continuing his WorldSkills training at CAVC alongside his apprenticeship and is hoping to be selected for Team UK to compete in the world finals in Shanghai.

Morgan has been supported throughout lockdown by WorldSkills Officer Emma Andrews, Cyber Security Lecturer Pete Franklin and Inspiring Skills. He is currently receiving WorldSkills training at the College – one of the first WorldSkills UK Centres of Excellence – on site with Peter Franklin and online with Dr Kaplan Radhakrishan, Academic Director at University of Wales Trinity Saint David. 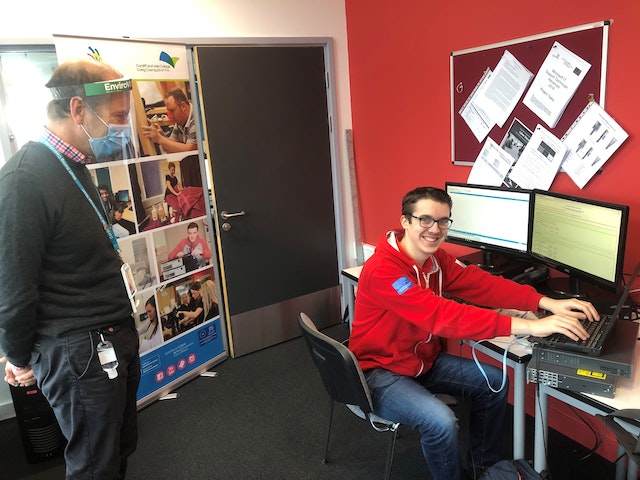 Often called the ‘Skills Olympics’, WorldSkills is an international competition which pits the best of the world’s young talent against each other in contests across a wide variety of disciplines. The College’s role as part of the WorldSkills UK Centre of Excellence is to embed world-class skills training across its entire curriculum.

Morgan has also joined the Inspiring Skills Ambassador Programme which will involve working with local schools and colleges to inspire others to participate in competitions and promote vocational career pathways.

“I am absolutely over the moon - it’s such an amazing feeling to have come this far,” Morgan said of his apprenticeship. “I have secured myself amazing career opportunity on a degree apprenticeship as a Software Engineer in a large company in London.

“There was so much competition with 1,000 applicants and only four positions available. I am so thankful for all the help and support that I was received from CAVC and for all the staff who believed in my ability to succeed.”

Morgan thinks coming to Cardiff and Vale College was “the best decision I’ve ever made”.

“My time at CAVC has provided me with the most amazing opportunities which I would have never experienced going elsewhere,” he explained. “The staff and tutors at CAVC go above and beyond for each student and it’s a great feeling know you are in the best hands.

“My tutor Peter Franklin gave me the best training that helped pushed my abilities to the next level and really encouraged me to be my best version of myself. There is just so much that CAVC has done to help me shine and I’m incredibly thankful for that.”

Participating in WorldSkills is something everyone should try out, Morgan argues.

“It’s provided me with world class training and facilities that has helped me go above and beyond in my skill area and helped me land an amazing career opportunity,” he said. “It’s not just “another extracurricular activity”, it’s so much more and that’s what people need to understand - it is quite literally an investment into your own future.”

Cardiff and Vale College Principal Kay Martin said: “We are all incredibly proud of Morgan and everything he has achieved. His journey is an inspiration and a true testament to the incredibly beneficial impact that taking part in WorldSkills can have.

“Congratulations to Morgan and to everyone at CAVC who has worked so hard to help him to get to this high level.”