They were greeted at the campus in Trowbridge by Eastern High Headteacher, Armando Di-Finizio, Deputy Leader of Cardiff Council, and Cabinet Member for Education, Employment and Skills, Cllr Sarah Merry, Chief Executive of Cardiff Council, Paul Orders, Director of Education and Lifelong Learning, Nick Batchelar, and Chief Executive of Cardiff and Vale College, Mike James, along with pupils and students from the school and college.

A commemorative plaque was unveiled, followed by a tour of the campus. As well as being shown around the new facilities, it was a chance for the Education Secretary and Lord Mayor to meet pupils, students and staff.

The £26m project to build the campus has been jointly funded by Welsh Government and Cardiff Council, through the £164m, band A, 21st Century Schools and Education Programme for the city.

Education Secretary, Kirsty Williams, said: “I am delighted to officially open Eastern Community Campus today, which has been 50% match funded with £13m through the Welsh Government’s £1.4bn 21st Century Schools and Education Programme. “This marks the culmination of a £41 million investment in secondary education for the area, which has included funding for relocation and the amalgamation of high schools prior to the construction of the campus. “I am proud that this programme is the largest investment in our schools and colleges since the 1960s and will replace and refurbish over 150 schools and colleges by 2019. “Eastern Community Campus will provide learners here in East Cardiff with a fantastic setting in which to learn, aspire and achieve. I’m sure the building will serve our learners and teachers well for many years to come.”

Eastern Community Campus can accommodate up to 1,200 Eastern High and 320 Cardiff and Vale College students. It includes flexible learning spaces that can be configured for a variety of uses, and the very latest in Design and Technology, science and IT facilities.

There are distinct areas for the school and college to use, but the site also allows for cross-working between the two institutions.

Speaking at the official opening, The Right Honourable The Lord Mayor of Cardiff, Cllr Bob Derbyshire, whose tenure comes to an end tomorrow, said: “To have the honour of officially opening this superb building on my last full day in office as Lord Mayor makes me immensely proud. An enormous amount of work has gone into making this happen, with a huge number of people involved. “Eastern Community Campus is more than just a name. It signifies that this is a shared home for both Eastern High and Cardiff and Vale College. This is the first time Cardiff Council and Cardiff and Vale College have worked together in this way, creating school and college provision on the one site, to offer a smooth transition into post-16 education and training. “Thanks to everyone involved in making Eastern Community Campus happen, and creating an absolutely fantastic learning environment for the children and young people of east Cardiff, and creating great facilities for the whole community.” 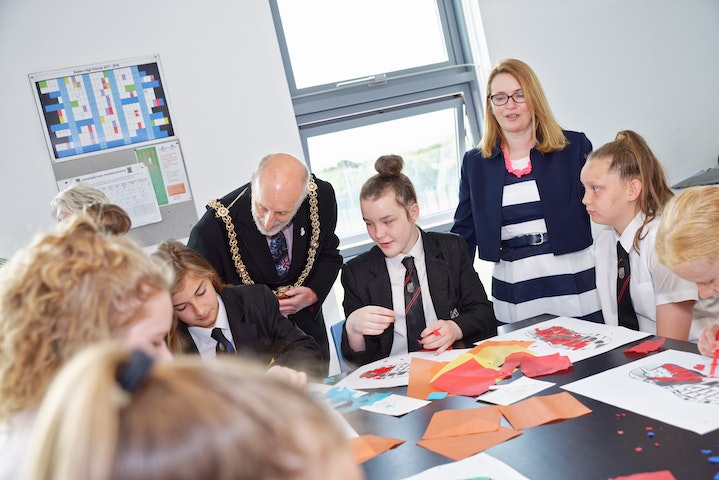 In tandem with the project to build the new campus, Eastern High, with support from Cardiff Council, has embarked on a significant improvement journey.

Headteacher, Armando Di-Finizio, said: “We’ve all worked incredibly hard over the course of the last three or four years, making sure the ethos and quality of learning was developed to a standard fit for such an amazing building. We have started to see all that hard work paying off, with significantly improved GCSE results last summer, Estyn removing the school from special measures in November and rising from red to yellow in February’s school categorisations. “Moving the school in a couple of weeks over Christmas was also some achievement, and I’m incredibly proud that we managed to pull it off. Today’s official opening is not only a chance to reflect on how far we have come in the last few years, but also an opportunity to look ahead, building on the rising standards we have seen so far, and to deliver further improvement as we aim for excellence.” 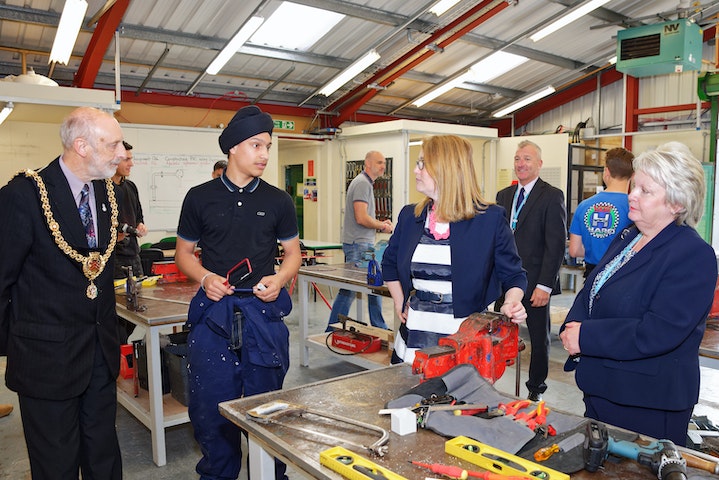 A range of facilities available for community use have also been included in the design, for example, pitches and internal spaces that can be hired, and a restaurant operated by the college.

Chief Executive of Cardiff and Vale College Group, Mike James, said: “It is a pleasure to officially open Eastern Community Campus today, marking a major milestone in an innovative partnership between Cardiff and Vale College, Cardiff Council and Eastern High to bring much wider choice in education and post-16 options for young people in East Cardiff. Eastern Community Campus is an inspirational facility for both young people and the local community and it is a delight to see it open and helping young people to realise their potential. “Cardiff and Vale College has a long history of working with the people of East Cardiff and with this campus we are not only bringing post 16 options back to the area, we are also bringing new opportunities and new career routes to motivate and encourage even more people.”