Cardiff and Vale College students have won a magnificent 34 medals in this year Skills Competition Wales Inspiring Skills contest, despite the pressures of lockdown.

Rather than travel from college to college to compete, this year all the contests took place in-house and were judged remotely. CAVC took part in some of the competitions, such as Inclusive Horticulture, Inclusive Motor Vehicle, Enterprise, Forensic Science, and Coding, for the very first time and still came away with winners.

Many of the winners will now go on to compete in the WorldSkills UK Finals, and could stand a chance of representing the UK at the international WorldSkills Finals in Shanghai later this year. At just under 150, CAVC has its highest ever number of entries in WorldSkills UK, one of the highest in the country.

Kian Swainston is on a BTEC Photography course at CAVC, which the College only started to offer this year. He won a gold in Photography.

“When they announced that I had won first place under the photography section I was literally over the moon,” he said. “It was a massive confidence booster and I really enjoyed the experience of it too. “The competition provided workshops with professionals that work in the industry where they shared tips, tricks and advice to new photographers like myself!"

“I'm looking forward to progressing on to WorldSkills and challenging myself further.”

The Enterprise contest was another first for CAVC and A Levels student Ruby Nsubuga was part of the team that won gold.

“It was amazing to win it boosted my confidence not only in myself but in my ideas as a person,” Ruby said. “I most definitely learned that team work makes the dream work - my team was genuinely the best.” Level 3 Hairdressing student Elaine Green won gold in Hairdressing.

“When I was asked by my tutor Nicola Hamonda to enter the Skills Competition Wales I was extremely flattered that Nicola thought I was good enough so went ahead,” she said. “I had to complete three styles which needed to be absolutely perfect, this took a lot of time and patience, I also had self-doubt issues along the way but continued on and put forward my entries.

“On the day of the awards I was watching with my daughter when my category came up, as they got to the silver medal my daughter said ‘Never mind mum maybe next time’. Then they announced the gold winner ‘ME’ we both screamed. I really could not believe that I had come first!

“It was such a great achievement of which I am super proud and still in shock to this day. Thanks so much to Nicola for entering me and letting me be part of such a wonderful experience. If anybody was to ask me should they enter I would say ‘Yes!’ - it is so worth it!”

CAVC Principal Kay Martin said: “A massive and heartfelt congratulations to all of our winners across the CAVC Group. To bring home so many medals under such challenging circumstances is an amazing achievement. “I’d also like to thank all of the staff across the College and CAVC Group who work dedicatedly and tirelessly to ensure their learners can reach such high standards – this result is a testament to you all.”

Welsh WorldSkills UK Delegate and Cardiff and Vale College Group Chief Executive Mike James said: “Congratulations to all of our Group students on another year of excellent results. The CAVC Group is a firm believer in the importance of skills competitions and the role they play in developing strong skills sets and creating a source of future talent who will be able to add instant value to any employer. “It is my goal to get as many Welsh members of Team UK as possible in WorldSkills Shanghai 2021 and the wide range talent seen across Skills Competition Wales is hugely promising. Well done to everybody, staff and students, who has taken part.” The CAVC Group family is made up of Cardiff and Vale College, ACT Training and ALS. 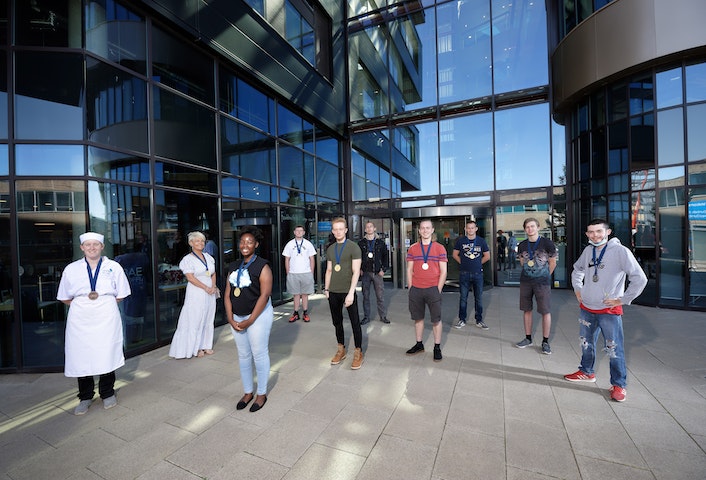