Cardiff and Vale College has celebrated the hard work, success and progression of its learners, recognising a year which saw some of its learners distinguished as being among the best in the world in their fields.

Hundreds of attendees from across the spectrum of local business, education providers and the community joined learners and their families for the College’s 2019 Annual Awards Evening. The glittering Winter Wonderland-themed ceremony at the College’s City Centre Campus was hosted by broadcaster and former CAVC student Jason Mohammad.

Showcasing highlights of the 2018-19 academic year (see full list of winners below), the awards also illustrate the unique experiences and progression opportunities CAVC has to offer.

All of the students recognised on the evening have either won national, international or regional competitions in their chosen disciplines; progressed into apprenticeships and employment with renowned companies; gained places in subject leading universities or performed exceptionally in their studies.

CAVC Principal Kay Martin said: “The Cardiff and Vale College Annual Awards Evening is one of the key highlights of my year, and every year it seems to get better and better. The standard of students we have celebrated this evening and what they have achieved has been outstanding.

“However proud I am of all of the learners we have recognised with these awards, there does have to be one overall winner and he is one of the best in his field in the world.”

That overall winner was Kyle Woodward, who also won the IT Award. Kyle was a stand-out student during his time at CAVC, regularly taking part in and scoring highly in regional and national skills competitions as part of Skills Competition Wales and WorldSkills UK.

In fact, Kyle performed so well in these gruelling contests that he was selected for Team UK in the WorldSkills Finals in Russia in the summer, competing in the Cyber Security competition. Known as the ‘Skills Olympics’, the WorldSkills Finals bring together the most talented young people from across the world.

“I’m amazed that I’ve won both of these awards – I’m still shaking!” Kyle said. “I wanted to try my hardest when I first came to the College but I never thought in a million years that I would be able to come this far. It’s awesome.” 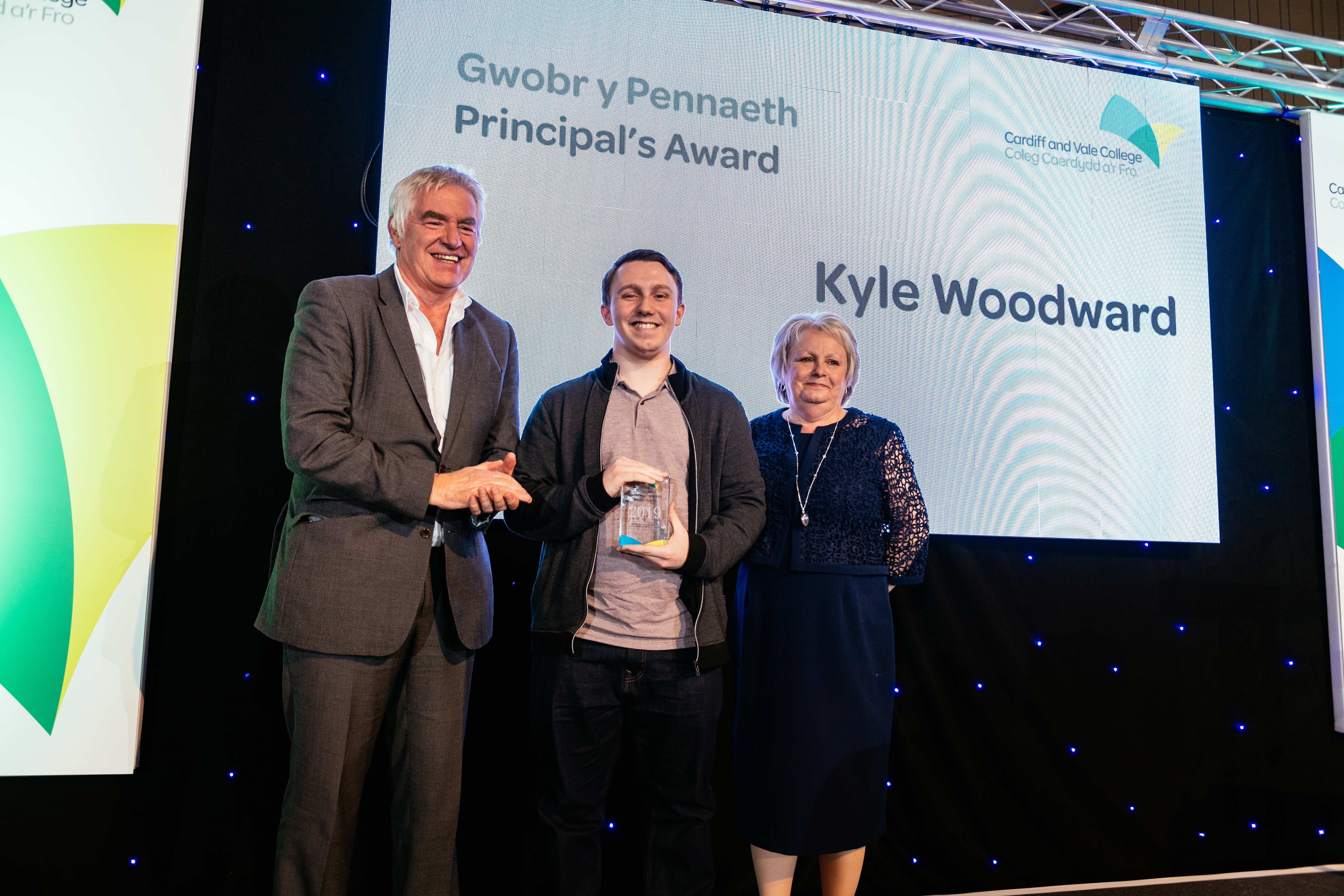 Kyle has now progressed on to study Applied Cyber Security and the University of South Wales and hopes to become a pentester – and ethical hacker – with his own business.

Esta Lewis won the Apprenticeship Award. Rhondda Cynon Taff’s first Heritage Outreach Apprentice, Esta has been inspired by her grandfather to make history accessible to all.

The 23-year-old from Aberdare was such a hit that she soon found herself running and developing workshops at the Welsh Mining Experience at Rhondda Heritage Park. Esta’s development of school workshops not only generated extra income but also led to a quality award and this year Esta won the Tomorrow’s Talent Award at the Apprenticeship Awards Cymru.

“Winning this CAVC award is brilliant, it’s really special,” Esta said. “The last year has been amazing – I got an apprenticeship that I never thought I would and now to be commended for my work is really good.

“The College staff have been amazing, especially my assessor Helen Kingman. I’m dyslexic and she helped with that and she is always looking after my wellbeing.

“This award means the world to me especially as I’m in the museum sector which is really hard to get in to. To be able to get an apprenticeship, a job and be recognised with an award as well is amazing.” 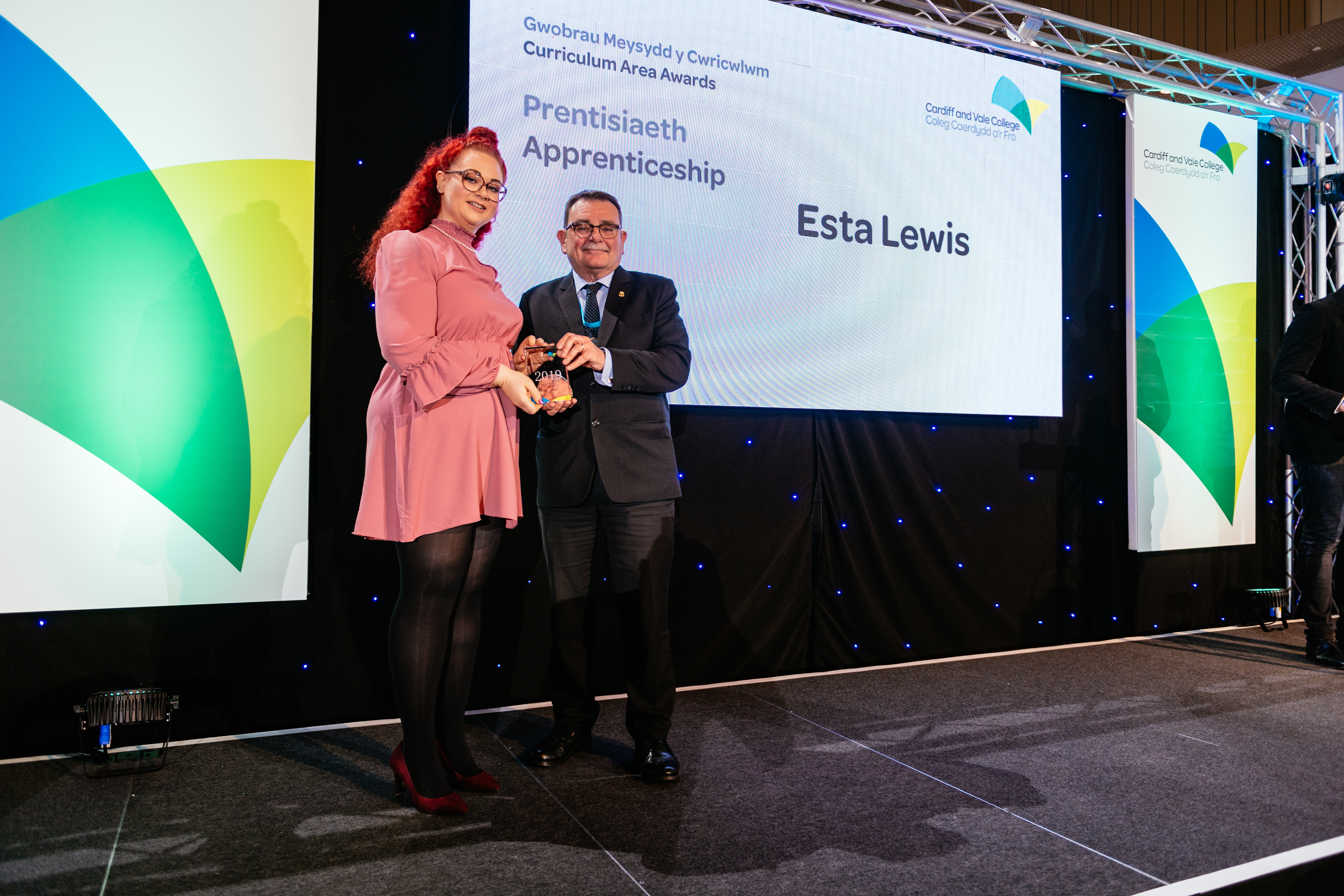 The Sport, Public Services and Tourism Award went to Sport student Aaron Tyner. Determined to overcome any challenge he might face, Aaron has shown he is more than capable, captaining the CAVC Football Academy alongside his studies.

Now studying at the University of South Wales, coaching and playing football professionally, Aaron proved himself to be an ambassador for the College, representing CAVC and Colleges Wales at a meeting with the Brexit Minister to demonstrate the benefits of Eras+ visits.

“I was a bit nervous about going up and getting this award,” Aaron, who is 18 and from Cardiff, said. “I’ve won an award before but this is completely different – this is obviously high-end stuff and I’m really happy to have won it.” 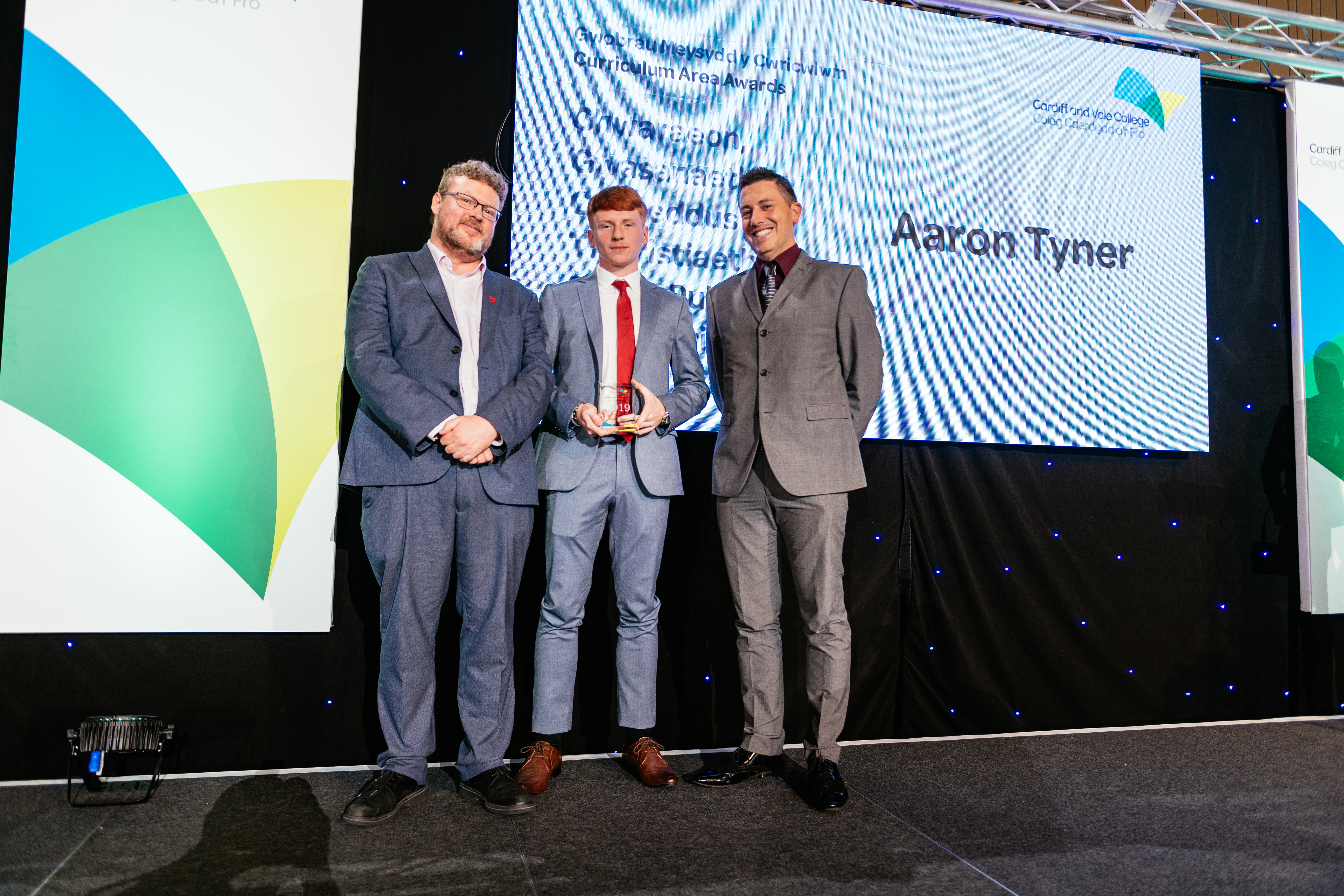 Jessica Dix was the winner of the Building Services Award. Breaking through in the traditionally male-dominated heating and ventilation, refrigeration and air conditioning industry, Jessica won the regional title in this year’s WorldSkills regional heats and will go on to compete in the UK finals in 2020.

“Winning this award is amazing,” the 28-year-old from Barry said. “It’s nice to know that all of your hard work has paid off and I’ve done this for my mum and dad and everyone else who has believed in me for the last few years.” 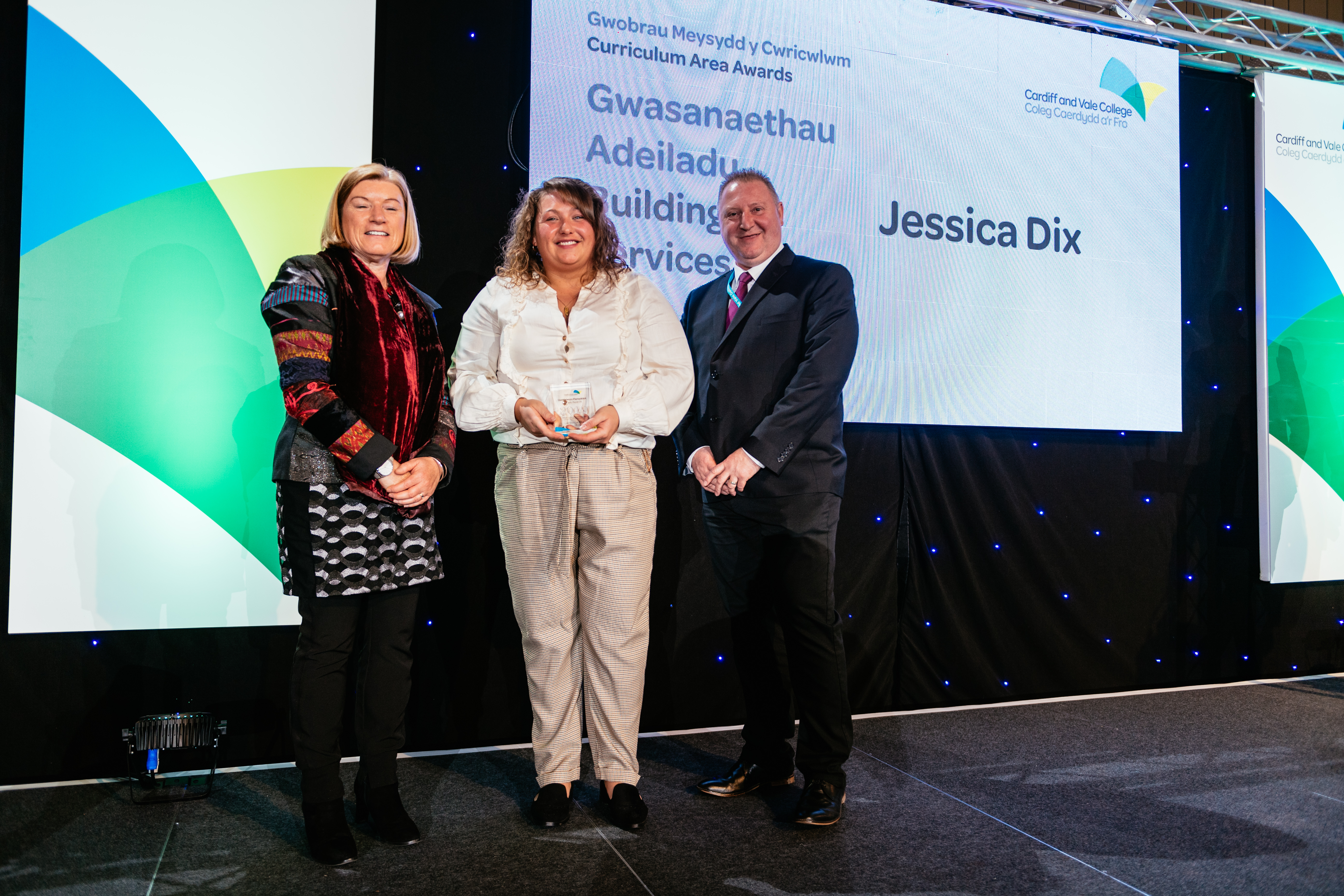 Former student Ben Thomas was one of the CAVC Alumni Award winners. A hugely popular captain of the CAVC Rugby Academy during his time at the College, Ben has gone on to sign his first senior contract with Cardiff Blues, win the Premiership’s Newcomer of the Year Award and was named the Cardiff Blues Academy’s Player of the Year.

Kristian Brooks won the Outstanding Contribution Award for his tireless commitment to working in his own time to help the College’s Technology Enhanced Learning team. He also represented Wales this year in the Network Systems Analyst contest at the WorldSkills UK finals.

College partner organisations Circle IT, Hafod, It’s My Shout, Microsoft, Castell Howell and Glamorgan Cricket were also celebrated for the innovative approaches to Further Education on behalf of CAVC.

A wide range of sponsors supported the event, ensuring the College could recognise learner achievement in style. CAVC would like to thank Cardiff Metropolitan University, Circle IT and the University of South Wales for making the awards the success that they were.